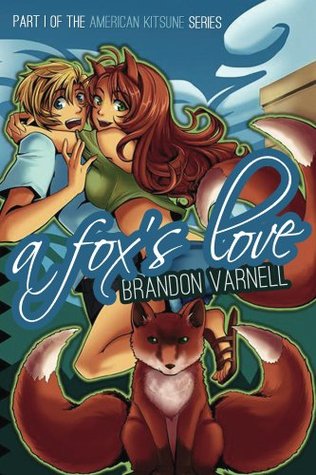 The story of a boy, a fox, and a whole lot of ecchi…

Kevin Swift has the worst luck with women. It’s not that he’s unattractive or even unpopular. He just can’t talk to them. He blames it on all those Shōnen love comedies he enjoys watching. Fortunately, or unfortunately―depending on who’s asking―Kevin’s love life is about to start looking up.

After saving a fox’s life Kevin discovers that he actually rescued a Kitsune, a shape-shifter capable of transforming into a beautiful girl who appears to have popped right out of the pages to a Shōnen manga. Her name is Lilian, and she apparently wants to mate with him.

Between dealing with an overly amorous vixen’s zealous attempts at getting into his pants, his inability to talk to girls and school, Kevin is going to have his hands full.

Once in a while you need to expand your horizon and try new things. That’s what I did by reading this novel. To be honest, I don’t really know much about animes and mangas so I was a little lost with some of the terms used in this novel. Fortunately, I have a friend I can count on in times like this. Only thing is, I forgot to ask him what “ecchi” means and I was halfway through the story before I realize it was why some parts were written this way and that way.

I’m not sure if I was blushing along with the character but it was definitely uncomfortable while I was reading it in public. Anyway, I got over it eventually because it was hilariously crazy. One thing is for sure with this novel– it’ll make you laugh.

We begin with an awkward boy who met a very foxy lady.

I am familiar with this foxy lady or Kitsune to be more specific. Why? Because there is this one Korean TV show with the same premise as this book (characters seen on the gif above ^.^) and I adored it so much (don’t worry, I didn’t compare it with this book). So, when I read the blurb I got curious and I just have to add this on my reading list.

Let’s now talk about the characters. One thing I appreciate about this book was that there wasn’t much random characters introduced. I mean, as you read this book, you’ll know that the author clearly knows what is substantial and unsubstantial to the story. So, because of that, you get to focus on the significant people within the story. I could categorize this book as a light read, so to have few characters is acceptable. With the protagonist, I laughed a lot with his misfortunes. I sound bad right? its just that he is ridiculously hilarious and absurd in so many ways that you can’t help but laugh. But, he’s also cute with his innocent thoughts and pure intentions. Then we have the Kitsune who is such an annoying little girl/fox. I just don’t like her character in here. I mean, I was looking for something that would make her character interesting but she’s just a girl who is fox in the story and that was just it. Then the antagonist, I have been waiting for this character to eventually show up in the story and for me it just took so long. It would have been really engaging for me if there was already some action in the first half of the story. I kind of expected it since it was also an urban fantasy book.

The plot was simple yet full of humor. If you are looking for a book that is light, fun and with a little touch of mystery then this would be a great start.  I assure you that you will have a good laugh afterwards. But if you are looking for some hard core urban fantasy thing, I think this book wouldn’t be enough. I mean, for someone who loves fantasy, I expected it to have more from that genre than the romantic comedy side.  But anyways, I think this book will do for those who love to read animes, mangas, and cutesy romance stuff full of humor.

I gave it a 3 out of 5 stars on Goodreads

Hi there lovely reader, I AM BACK! Yes, abOOkishOwl is back on track.

Thank you for giving me a little of your time today. Obviously I have been on hiatus for a month and I am sorry for not telling you ahead of time. I guess most of you know that I am studying medicine this year and its been quite a challenge for me to adjust with med life. But I’m not complaining here, I am enjoying med life and I’m excited about it every waking moment of my life ❤ HAHA! Anyways, since I am still adjusting, its been tough for me to get into reading fiction and blogging about it when I know that I need to read for my classes. It took me a month to finally devise and apply the perfect timetable that would get me into the serious stuff of med school without sacrificing my love for reading and blogging. So…..YAY! Expect to hear from me from time to time, and that I hope you will find my future posts interesting and worth the read. 🙂 Thaaaanks!

A little note to my awesome readers:

I apologize to those emails I haven’t responded yet, I’m still on the process of reading them and I’ll get back to you soon once I’m done. To those authors whom I promised a review coming up soon (I know “soon” is taking a lot of time now), I have them already, I just didn’t have the time to proofread it and post it here so I really am so sorry. For those of you who have been anticipating my posts, a big thank you, I still hope that you do and that you will still read the stuff I write here on my blog. And of course, to those who recently stumbled upon my blog and stayed, I hope that you will find my blog worth reading.

Thank you again for reading and God bless :*